Classifications are meant for easier academic communication as well as predict prognosis and outcome. The importance of classification is best stressed in case of pelvis and acetabular fracture. the complex anatomy of the area and complexity of the injuries makes it difficult to standardise a classification that will easily predict the management protocol and outcomes. Various attempts have been made over the years to find the best classification system for these complex injuries and this review takes the readers through these many classifications and also presents the currently acceptable classification.
Keywords: Hip fractures – complication – salvage procedure – therapeutic algorithm.

The earliest attempt at classifying pelvic ring injuries was made by Bucholz where he described three groups essentially defining anteroposterior injuries of later classification systems.[1] Pennal et al described their classification based on mechanism of injury as anteroposterior compression injuries, lateral compression injuries, or vertical shear injuries.[2] This classification was later modified by more comprehensive description of same groups by Young and Burgess while Tile modified the original Pennal classification by factoring in the vital element of stability.[3,4] Both these later classification systems are in current common usage although they compliment each other as Young and Burgess gives better anatomical description of injury thereby guiding the type of fixation, while Tile factors in the element of stability which is the single most important factor dictating need for fixation. Helfet later developed comprehensive system of classification where he incorporated both these existing systems and described injuries on the lines of AO/OTA system.[5] Although for routine usage many prefer to use either Young-Burgess or Tile system, however it is recommended to use comprehensive system for the purpose of comparing or reporting results.

Young-Burgess classification (Mechanism of Injury)
It is useful to predict mortality, transfusion requirements, and associated organ injury. This system classifies the pelvic ring injuries into four types according to vector of force causing them. These are anteroposterior compression (APC), lateral compression (LC), vertical shear (LC) and combined mechanism (CM) injuries. Both APC and LC injuries are further divided into three groups according to extent of injury (Fig. 1, Table 1).

Anteroposterior Compression
The essential element is disruption of anterior ring generally at symphysis. The three subgroups represent progressive extent of injury involving only symphysis (APC I), disruption of pelvic floor and anterior sacroiliac ligament (APC II) and disruption of posterior sacroiliac ligaments (APC III). Although earlier studies showed predictive level of diastasis for these three groups (APC I: 1-2.5cm, APCII: 2.5-4cm; APCIII: >4cm), however this has been challenged recently. Moreover, radiographs represent only a static image and might underestimate the extent of injury which require stress examination under fluoroscopic guidance for more comprehensive evaluation.

Lateral Compression
The essential lesion in this injury pattern is injury to posterior ring with anterior displacement at level of symphysis or fractured rami. Posterior lesion can be either compression fracture of sacrum (LC I) or fracture dislocation of sacroiliac joint where a crescent shaped portion of iliac bone remains attached to sacrum while rest of joint is dislocated (LC II; crescent fracture). LC III injuries have either LC I or LC II ipsilateral injury with contralateral open book injury of sacroiliac joint (windswept pattern).

Vertical Shear
The essential element of this pattern is vertical and posterior displacement of hemipelvis typically assessed at posterior ring level. Posterior ring injury may be at sacrum, sacroiliac joint or ilium which is combined with anterior injury at symphysis or rami.

Combined Mechanism
It is not uncommon to see injuries where more that one of the above mentioned mechanisms are at play. All such injuries are grouped under CM injuries 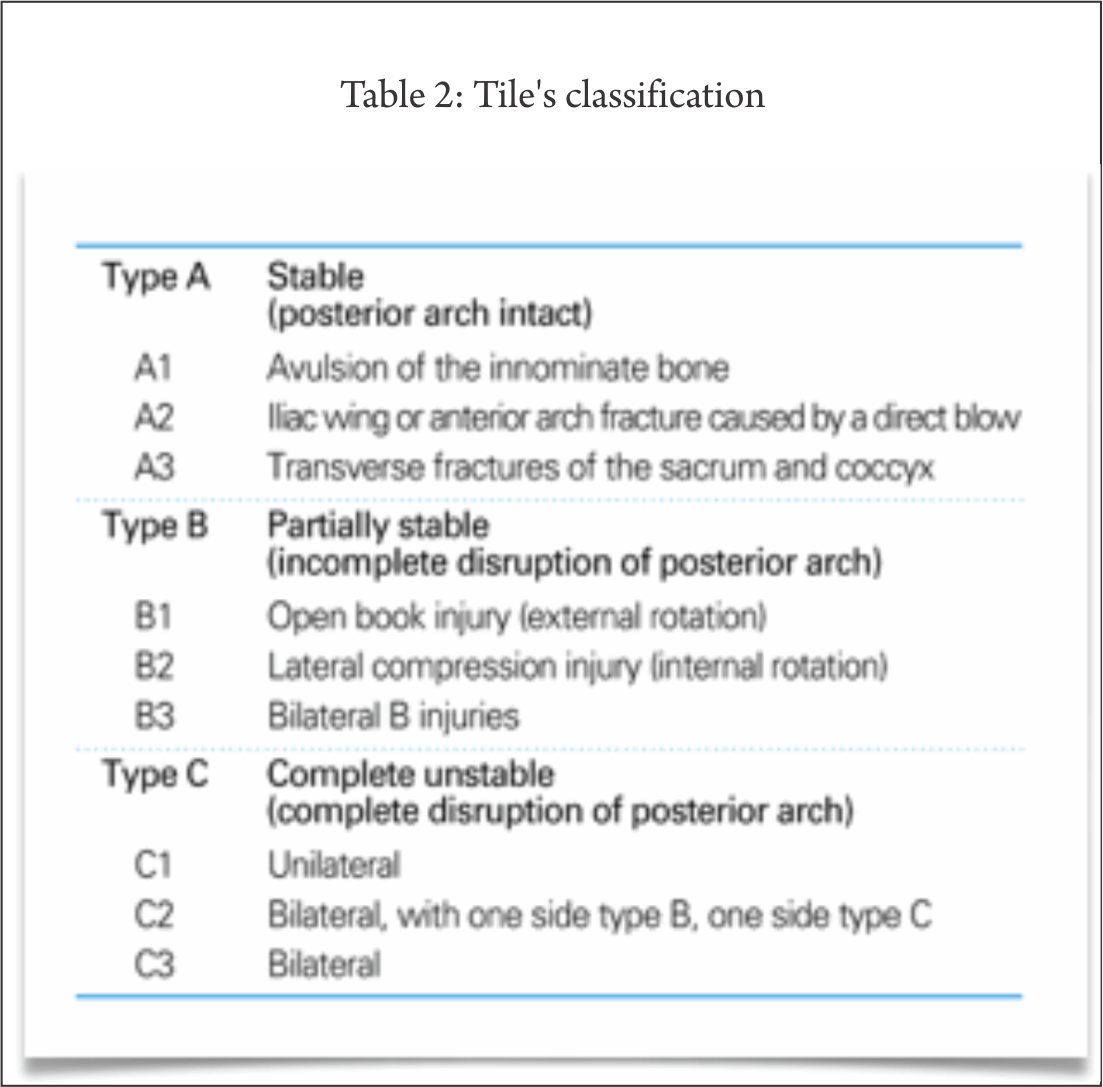 Comprehensive Classification
This classification of follows AO/OTA system where pelvis has been given number 6 while pelvic ring is number 1. [6] Thus pelvic ring injuries will be designated 61. Further classification in groups is based on stability which is described in context with integrity of posterior ring. Group A are stable injuries while Group B and C are partially stable and completely unstable respectively. Groups are further divided into subgroups and qualifications based on anatomical description and/or mechanism of injury (Table 3). 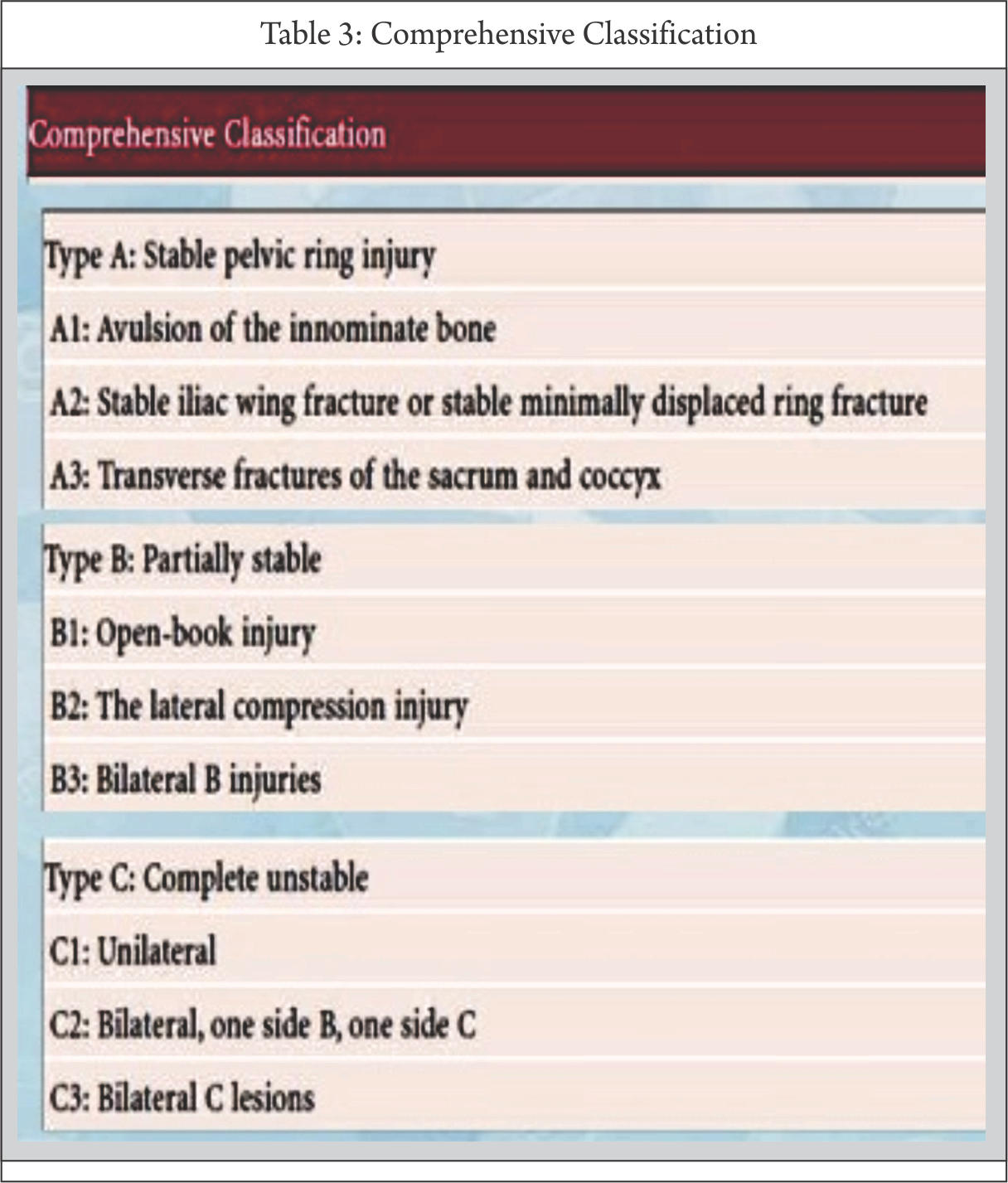 Posterior wall fractures (62 A.1)
These fractures are most common acetabular fracture (30%) and are associated with posterior hip dislocation (Fig 3) . By definition, posterior wall fractures should not involve quadrilateral plate which will make it a posterior column fracture. These fractures are further divided based on presence of single (A.1.1) or multiple fragments (A.1.2) and existence of marginal impaction (A.1.3). All three groups are further subgrouped based on location of fracture as (1) posterior; (2) posterorsuperior or (3) posterosuperior.
When associated with other fractures like transverse, T-type or both column fracture, presence of posterior wall fracture which compromises stability of hip joint essentially dictates surgical approach and reduction technique.

Anterior with posterior hemitransverse (62 B.3)
These are essentially variants of T-type fractures where anterior wall or column fracture is associated with transverse fracture in posterior half which is often undisplaced and almost always less displaced than anterior fracture. Frequently occurring in geriatric age group, these account for 7% cases of acetabular fractures. This fracture type frequently exibit marked anteromedial displacement which is significantly more than isolated anterior fractures. Furthermore, medial impaction of intact acetabular roof is often observed (gull wing sign) which imparts poorer prognosis. 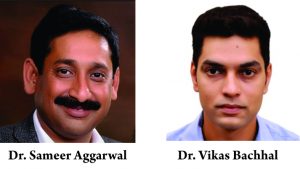 How to Avoid local Complications during Primary and Revision surgery of Trochanteric fractures: Advices and Tricks for operation tactics and Trouble-shooting