TFN is a novel implant based on the experience of gamma nail. Minimally invasive TFN, despite few
unfavorable results and complications is a satisfactory method in treating unstable it fractures. It requires closed monitoring during pre,
intra and post-operative period to avoid complications, which can be easily managed.

Inter-trochanteric fracture most commonly affect the elderly population and also in young. The incidence has increased significantly during recent years due to the advancing age of the world’s energy trauma, whereas in the elderly age group most of the fractures are osteoporotic, resulting from a trivial fall. [1] These fractures have a tremendous impact on the health care system and society in general. These fractures can be managed by conservative methods, but mal-union and complications of prolonged immobilization is the end result. Thus, surgery by internal fixation is the ideal choice. DHS is the gold standard treatment for inter-trochanteric fractures. [2] In cases of unstable inter-trochanteric fractures, the incidence of limb shortening, medialization of distal fragment and implant cut-outs is high. [1] This led to the development of intramedullary devices. Numerous variations of intramedullary nails have been devised to achieve a stable fixation and early mobilisation of trochanteric fractures. Among these the trochanteric fixation nail (TFN) devised by the AO/ ASIF group in 1996 has proven to be a promising implant in per-, inter- or subtrochanteric femoral fractures. [3] These devices have the advantage of being an intermedullary fixtion device, shorter operative duration and less soft tissue dissection.

Purpose of the Study
To study the outcomes in terms of adequacy of fixation and stability and to evaluate end results
and complications.

The study consisted forty cases of unstable inter-trochanteric fractures of femur treated surgically with Trochanteric fixation nailing at our institute between 2010 to 2014. The fractures were classified according to Boyd & Griffin’s classification. Type-IV cases were mainly excluded because of extension of the fracture onto the proximal shaft since problems were encountered with fixation of the distal locking screw which mainly crossed the fractured fragment while using conventional TFN (180mm). All the 40 Patients were available for follow-up.
The age of the patients in the study, ranged from 30 years to 88 years, average being 61.78 years. Out of forty patients, sixteen were females and twenty four were males. The Most common mode of Injury in our series were trivial fall accounting for 19 cases, followed by road traffic accidents in 14 cases and fall from height in 7 cases. Right side was affected in 19 cases and left in 21 cases. Our series consisted of 40 cases of unstable inter-trochanteric fractures. Inter-trochanteric fractures were classified according to Boyd & Griffin classification. Cases were followed at regular intervals. This study was conducted with due emphasis for clinical observation and analysis of result after surgical management of unstable inter-trochanteric fractures of femur with Trochanteric fixation nail. Following the treatment, patients were discharged and followed up at regular intervals for clinical and radiological evaluation. The patients were followed up till fracture union and functional recovery was achieved. If necessary, subsequent follow up was done. At the arrival of the patient with suspected trochanteric fracture, patients were resuscitated depending on their general conditions. Fractures were stabilized using skin traction, alternatively with Thomas Splint.
A thorough preoperative assessment of patients were done, which include general condition of patients, clinical and radiological assessment of fractures, type and size of fragments. Once stabilized, all the patients were shifted to ward & skin traction was applied varying on the built of the patient. Analgesics were given accordingly. Patients were evaluated for associated medical problems and reference was taken from respective departments and necessary treatment started. Associated injuries were evaluated and treated simultaneously. Functional results were assessed based on the functions gained by the patients following surgery and points were awarded accordingly. The factors taken into consideration in assessing were Hip pain, Ambulatory status, Ability to squat, Walking distance, Sitting cross legged.

Surgery was performed on average of 8 days with a range of 4-14 days Due to financial constrain and other comorbid conditions. The delay was due to the general and medical conditions of the patients and managing associated injuries. Duration of surgery was longer in the initial operated cases. With frequent use of the nail system the duration has come down. Duration was longer in managing inter-trochanteric with subtrochanteric extension fractures type III, due to the difficulty in achieving anatomical reduction. Reduction was easier in type II inter-trochanteric fractures. Difficulty was noted in comminuted fractures and in cases with longer delay for surgery. Amount of blood loss was very less as compared to an average hip surgery. Blood loss was measured in terms of mop count and suction collection. The average amount of blood loss was 80 ml (range 60-120ml).
We encountered few complications in our study intra-operatively
1.Jamming of nail in the proximal fragment while insertion was noted, requiring progressive reaming of the proximal fragment and use of lesser diameter nail. 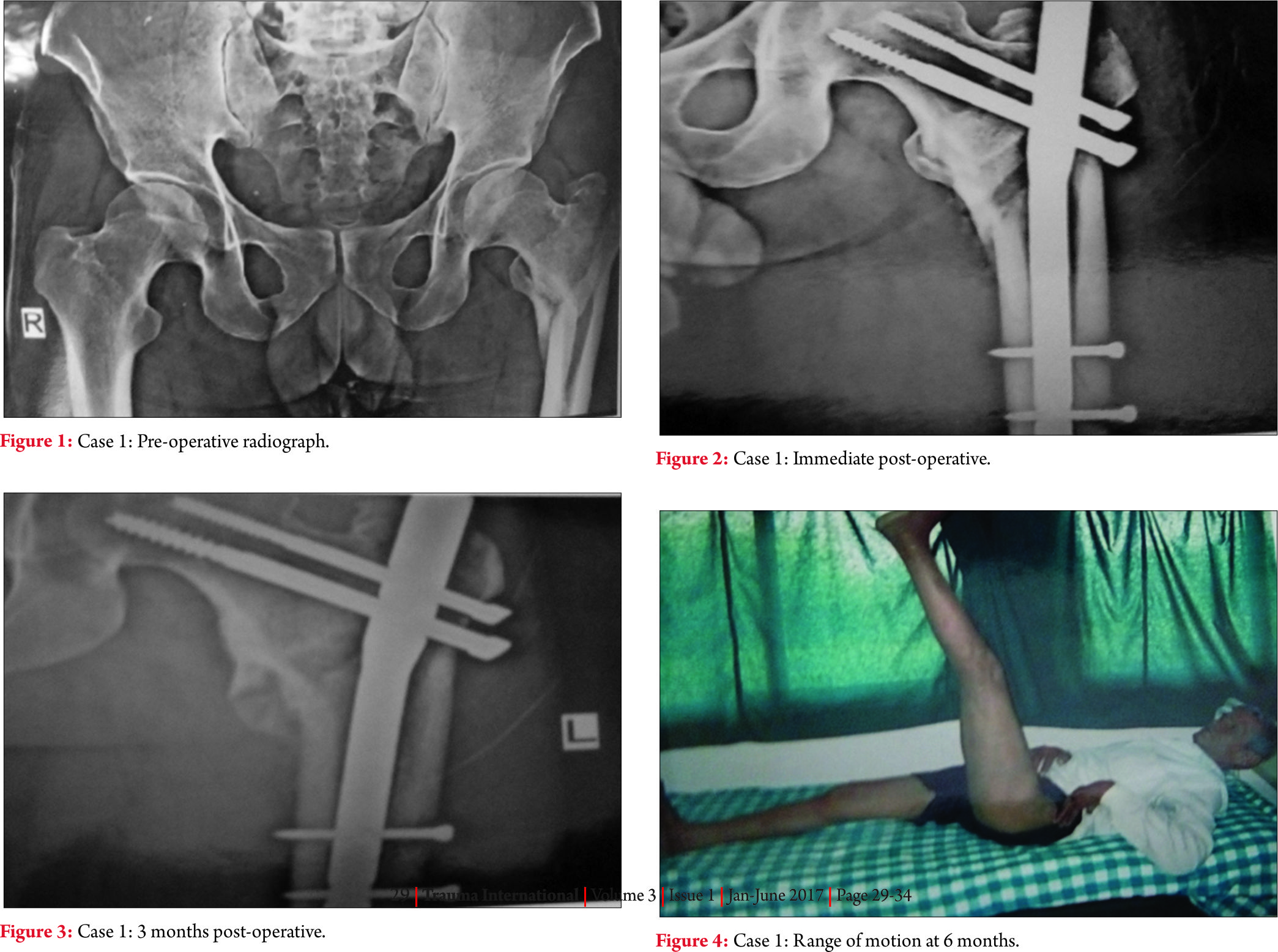 2.In one case manual distal locking had to done due to mismatch of the zig and nail, occurring intra-operatively.
3.In one case fixation of the fractures in varus angulation took place.
4.In one case iatrogenic fracture of lateral cortex of proximal fragment was noted. 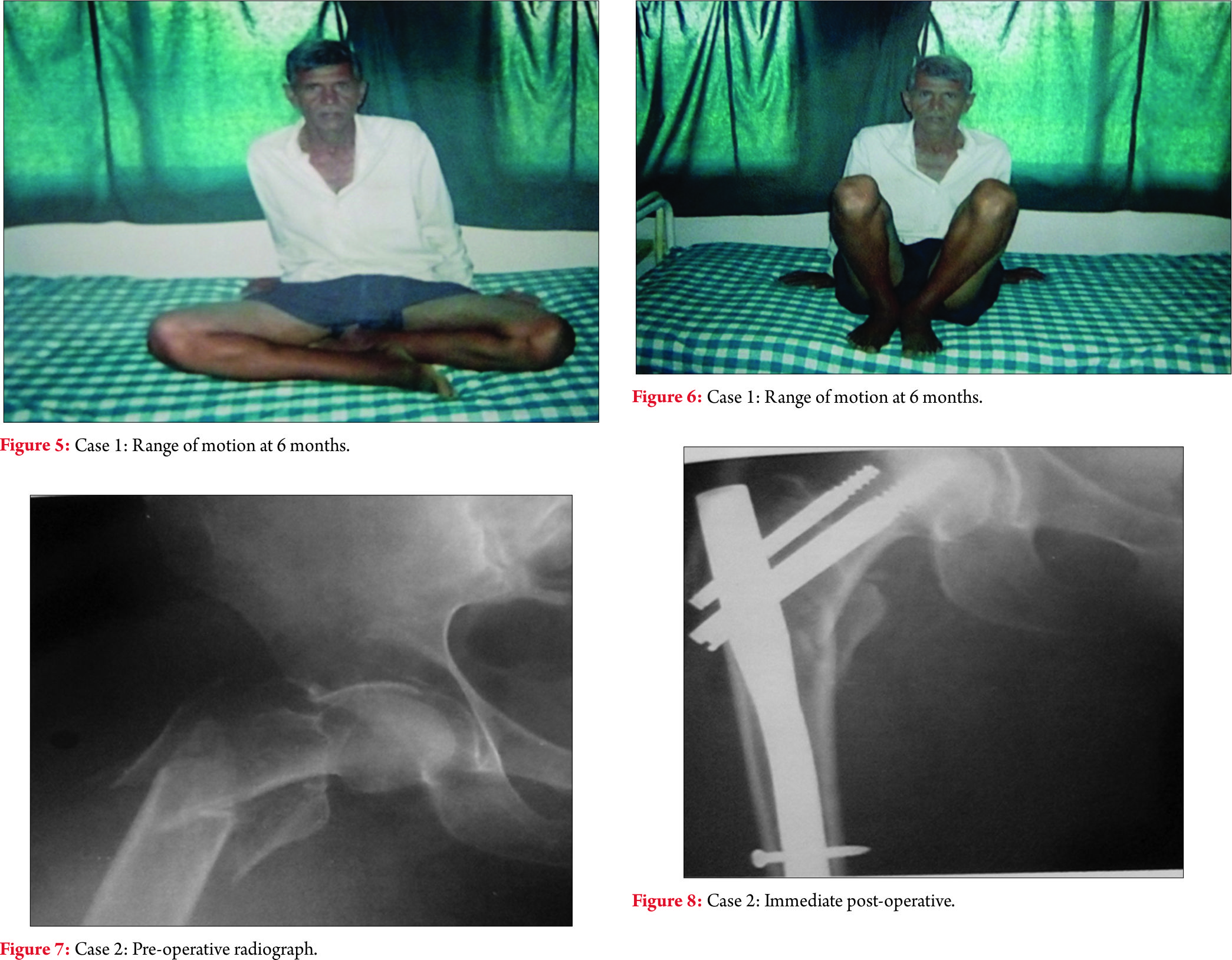 Delayed complications
A case of varus collapse was noted in inter-trochanteric fracture type III with shortening of up to 1cm, due to the prominence of the screw laterally which was managed with regular follow up, to wait for the fracture to unite & implant removal. Stiffness of knee was noted in 2 cases which required vigorous physiotherapy, with full recovery of the range of movements. Stiffness of hip was noted in 2 cases due to the complications associated (Z effect and reverse Z effect) which were managed subsequently. 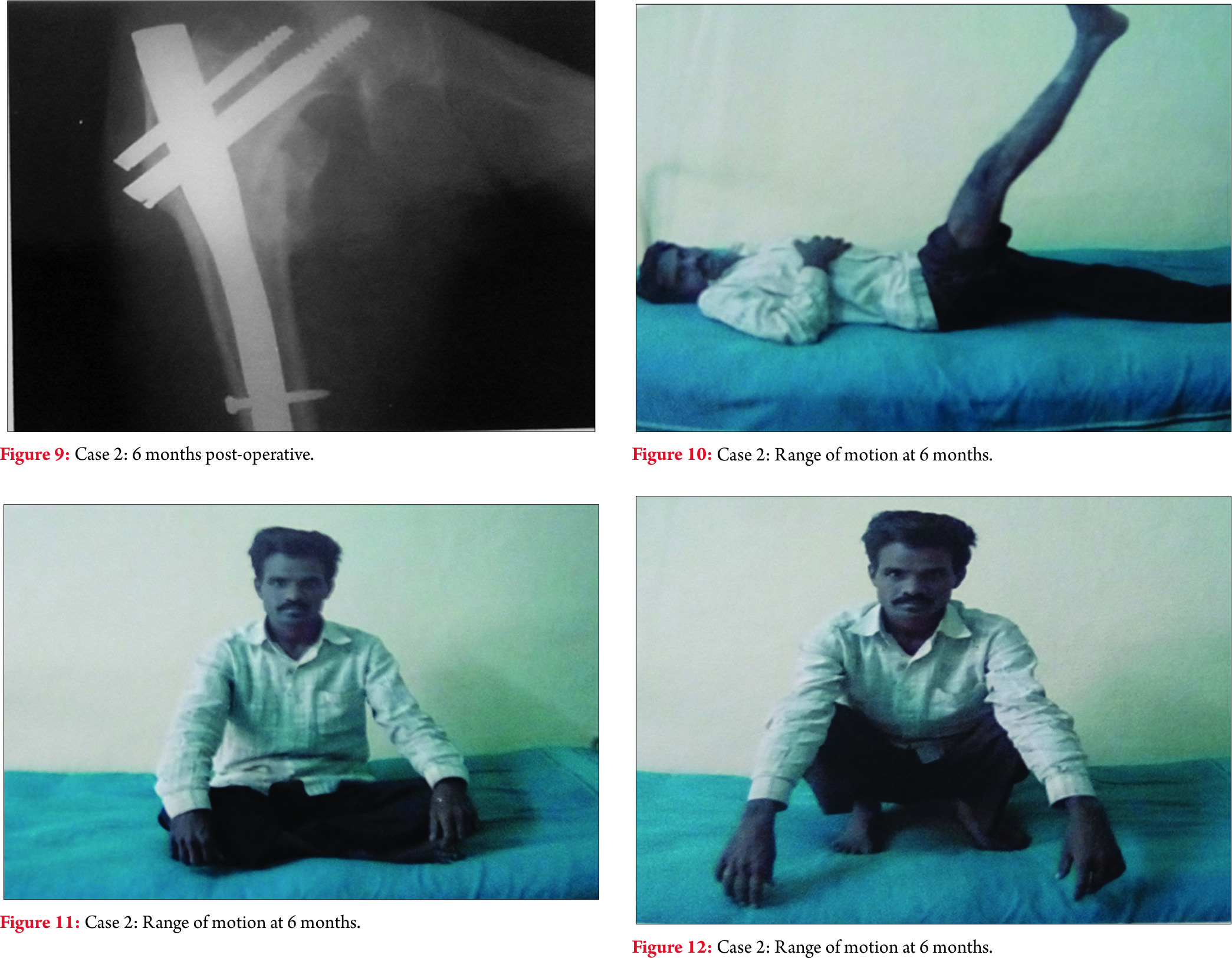 Duration
The average duration of hospital following surgery was 21.35 days ranging from 15-28 days. Patients were prescribed supportive drugs such as analegesic, antibiotics and other drugs as per associated medical conditions. Patients were advised to do physiotherapy such as quadriceps strengthening exercise, knee bending exercises and chest physiotherapy. Patients were instructed non weight bearing with bed rest upto 6 weeks post-operatively and were gradually made ambulatory with partial weight bearing using walker or crutches depending on the radiological signs of union and pain tolerability at subsequent follow up.

Morality
There was no mortality in this series of study.

Follow up
The average duration of follow up was 3 months ranging from 1-6 months, of which all the patients were available for follow-up.

Anatomical result
Anatomical results were assessed by presence or absences of shortening, deformities and range of movements. 92.5% of the cases had good results and 7.5% had poor results. 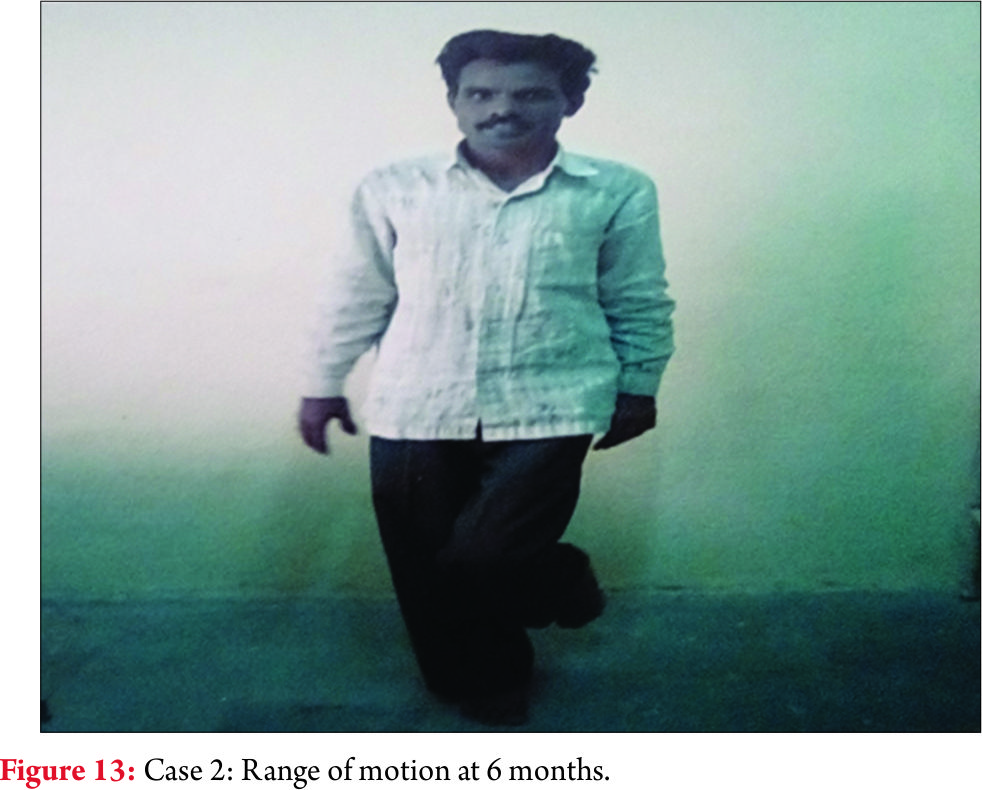 TFN is a novel implant based on the experience of gamma nail. In the light of these results, one can conclude that the TFN, despite few unfavourable results and complications is a satisfactory method in treating unstable IT fractures. It requires closed monitoring during pre, intra and post – operative period to avoid complications, which can be easily managed. It however requires large study population with a long term follow-up. 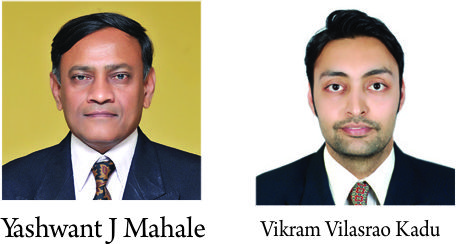