Background: Hip fractures belong to the most frequent fractures of elderly people. The treatment follows a specific algorithm that focuses on the medical as well as the social situation of these patients. Despite modern operative techniques and implants complications may occur. They may be distinguished into two groups: local complications and systemic complications
Especially local complications (cut out of the femoral head screw) are the reason for revision surgery. Surgery (“salvage procedures”) may only be performed after critical analysis of the local situation and individual planning of the revision procedure. This article outlines the tactical course of action in these cases.
Keywords: Hip fractures – complication – salvage procedure – therapeutic algorithm.

Hip fractures are typical injuries of the elderly [1]. Recent studies prove that the incidence of these entities rises dramatically with increasing age [1]. In 2008 Lohmann et al. showed an incidence of 0.06 percent at an age between 60 and 64 years and an incidence of 1.3 percent at people at their eighties [2]. In other words: More than 90 percent of the patients are in their seventies and in addition more than 70 percent are females [3].
American authors assume, that the number of hip fractures will increase from 250,000 in the year 1990 up to 500,000 in 2040 [4]. In Germany the rate of hip fractures totals up to 90/100.000 inhabitants for all classes of age but is 966/100.000 for septuagenarians [5, 6]. Till 2050 the incidence is assumed to multiply by five [6].
In case of geriatric patients suffering from a hip fracture leads to a significant decrease of life expectancy accompanied by an increased medical risk and a number of social problems (for example accommodation in a retirement home) [7, 8]. Anglo-American analyses indicate an average reduction of life expectancy of 1.8 years or 25 percent of the remaining life span per patient [9]. The treatment of such injuries demands a specific algorithm that takes the local surgical problems and co-morbidities as well as social necessities into consideration. Highest goal of the surgical treatment is the early mobilization, prevention of secondary complications and the return to maximal autonomy. Hip fractures today are regularly treated by operative stabilization [10]. Nevertheless the ideal operative procedure is still discussed in the literature [11].
Even modern operative techniques and implants these procedures show adverse events or complications in 15 to 20 percent [12, 13]. Based on acuteness, topography and implant association they may be distinguished into the following groups [14]:
A. Acuteness
Early complication (within three months after surgery)
tactical surgical failure
technical surgical failure
local complication (like wound healing disturbance or infection)
systemic complications (like deep vein thrombosis)

(Revision) Surgery: Planning and tactics
In reference to the special situation of aged patients one has to pay attention to two central factors no matter if one performs primary or revision surgery:
· short term operation
· full weight bearing possible after surgery
Thus the planning of surgery must be focused on the prevention of tactical and technical failures. Revision surgery necessary because of local complications may be divided into two groups:
· Implant (osteosynthesis) related procedures.
Planned implant replacement (for example progressive coxarthrosis that leads to removal of an intramedullary stabilization system in order to implant a total hip arthoplasty).
Enforced implant replacement based on local complications (salvage procedures)

Not implant related local surgery (like the relief of a local hematoma).
A strict separation between these two types of complications is not always possible in praxi. Based on the above named principles one has to keep in mind the following general standards [15]:
· On the part of the surgical procedure:
o full weight bearing possible after surgery
o stable implant fixation in osteoporotic bone
o preservation of the vascularization of the femoral neck and head
o simple operative technique

· On the part of the surgeon:
o profound knowledge of possible implants and surgical techniques
o mastery of the intramedullary and extramedullary surgical options as well as of arthroplasties
oclear Nevertheless the different studies still show different results indication for a specific implant.

Key-factor I: Preoperative analysis (Fig. 1 and 2)
Primary surgery as well as revision surgery demands a proper analysis of the local situation. The following questions have to be answered preoperatively [15]:
·Where is the problem localized (femoral head and/or femoral neck, trochanteric region, subtrochanteric)?
·Why did the complication occur?
·How may the problem be solved (reosteosynthesis versus (hemi) arthroplasty)?
·What is the correct implant?
·When is the optimal point in time for the operation?

Stable fractures (AO/OTA 31-A1) present the classic indication for osteosynthesis. The cure rate is close to 100 percent [20]. These fractures mainly are stabilized by the use of a dynamic hip screw (DHS).
AO/OTA A31-A2 and –A3 are unstable fractures. The optimal treatment is still open to debate in the recent literature [16, 17]. Intramedullary stabilization is considered to be better in terms of biomechanical considerations [21]. Nevertheless osteosynthesis failure is estimated to be 56 percent [20].
The question whether to perform reosteosynthesis or switch to hip arthroplasty is elaborated just by few studies. The different studies show different results. Nevertheless Faldini 2002, Sinno 2007 and Giannotti 2013 and 2014 indicate, that elder patients suffering from those unstable pertrochanteric fractures benefit from treatment by cemented hemiarthoplasty. This leads to faster mobilization and lower mortality [16, 17, 18, 19]. According to D`Arrigo et al. the candidates for proximal femur replacement are patients with non-viable proximal femoral segments, destruction of the proximal femoral articular surface, advanced age and the absence of coxarthrosis [22]. Total arthroplasty may be taken into consideration in case of patients with additional severe coxarthrosis.
Switching from internal fixation to arthoplasty offers some special problems [22]:
· failed internal fixation (sometimes accompanied by broken screws) must be removed
· necessity of special instruments in order to remove the failed system
· compromised proximal femur with bone loss distal to the typical neck-resection level for hip arthroplasty

Particulars and choice of typical complications of intramedullary systems
The overall complication rate is estimated between 3.6 and 18 percent in the recent literature [26].
Typical complications
·Dislocation of the lesser trochanter
·Varus dislocation of the fracture
·Z-effect-A classical complication of two screw systems (like the proximal femoral nail). The repetitive axial loading of the implant combined with an unstable fracture fixation situation leads to toggling of the nail within the femoral canal [31]. This leads to medial migration of the nail. This mechanism is also described in the 2008 study of Weil et al. [32]. Nevertheless the precise etiology requires further clarification [33].
·Cutout. The Cochrane analysis of 2010 describes a rate of 3.4% for intramedullary implants [27]. The contemporary 2014 study of Greorgiannos evidences a rate between two and ten percent [34]. For intramedullary system as well as extramedullary ones the possibility of cutouts depends on the positioning of the lag or sliding screw in the proximal fragment [34]. As early as 1995 Baumgartner et al. described the so-called “tip-apex-distance” (TAD). This nowadays is accepted to be the central principle for the optimal positioning of the lag screw. It is determined intraoperative in the ap. and axial view fluoroscopy [35]. Kuzyk et al. showed in 2012 that the position of the lag screw next to the “Adam´s bow” in the ap. view and in the center of the proximal fragment in the axial view optimizes the biomechanical stability of the osteosynthesis [36]. In addition Nikoloski et al. could prove, that the original TAD rule should be modified depending on the used system, especially when “two screw systems” are used [37]. These authors distinguished two main types of cutout [37]:
o cephaled cutout
o axial cutout
· Knife effect
· Secondary screw dislocation
· Peri-implant fracture. Robinson et al. described an incidence of 18.74 fractures per 1000 person years in case of fractures treated with intramedullary systems [38]. The analysis of Parker et al. in 2010 showed an incidence of 2.6 percent [27]. By developing new designs of the intramedullary devices in the last decades the rate of these complication could be decreased dramatically.
· Implant failure

Trochanteric femoral fractures comprise 50 percent of geriatric hip fractures. [39]. Although union rates as high as 100 percent have been reported after primary reduction and internal fixation with stable fractures ideal implants and optimal reduction failure rates over 50 percent are described in case of unstable fractures, suboptimal fracture fixation and poor bone quality [40]. Thus the correct individualized primary stabilization already presents a demanding problem. Appropriate management of failed primary osteosynthesis is even more challenging.
According to the recent literature the choice of treatment depends on the clear identification of the fracture type combined with the specific local situation [39]:
· AO/OTA classification of the fracture.
· radiographic analysis of the local bone structure
o presence or absence of osteoporosis
o presence or absence of extended bone loss
o presence or absence of significant coxarthrosis
When, based on the AO/OTA classification and the above-mentioned facts, the decision for internal (re-) fixation is made optimal reduction of the fracture fragments and positioning of the chosen implant is from central interest [35]. According to the recent literature implant failure generally seems to be the result of poor fracture reduction, mechanical stress, fracture instability or technical error [40] Although the optimal treatment for unstable fracture situations {AO/OTA 31-A2 and A3) are still discussed controversially in the last years a rising number of studies presents good results for arthroplasty as well for primary as for revision surgery [41,42]. Unfortunately there are only few comparative studies and even fewer prospective, random controlled ones which compare prosthetic hip replacement with the standard internal fixation in terms of primary and revision surgery [16]. In their 2014 study these authors come to the conclusion that there are no major differences between the treatment with hemi- or total arthroplasty but especially the elderly patients with severe osteoporosis or comminuted trochanteric fracture take significant profit from the treatment with hip arthroplasty compared to internal fixation [Giannotti]. According to Parker et al. in 2006 there are no significant differences between arthroplasty and internal fixation for mechanical complications, local wound complications, general complications and mortality at one year or long-term function [42].

· proximal hip fracture treatment is no trauma surgery for beginners
· local bone and fracture situation have to be clearly analyzed before taking one or the other surgical option into consideration
· primary stabilization as well as reoperations show specific pitfalls which may affect the outcome of any chosen treatment option significantly
· surgeons have to have profound knowledge about how to identify these pitfalls in order to avoid technical and tactical failure
especially in unstable fracture situations and in case of failed primary internal stabilization arthroplastic treatment should be a serious alternative. 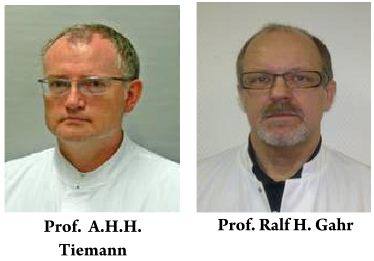 Classification of Pelvis and Aetabulum Injuries