Simultaneous bilateral elbow dislocations are extremely rare injuries in non athletic patients in the absence of generalised ligament laxity. There should be a high index of suspicion for associated injuries by careful examination and evaluation with radiographs. Prompt reduction and early rehabilitation ensures an excellent functional outcome.

A 25-year-old female, housewife weighing 95kgs was brought to the emergency department by ambulance with simultaneous bilateral elbow dislocations after landing on both hands with extended elbows. The parents reported no of history consistent with joint hyperlaxity of the patient. There was no positive family history for joint hyperlaxity
Clinical examination showed deformity of both elbows with loss of posterior triangular relationships of the olecranon and epicondyles suggesting bilateral posterolateral elbow dislocation associated with swelling and haematoma formation. There was no neurovascular deficit.Radiographs showed bilateral posterolateral elbow dislocations with a bilateral radial head fracture. (Figure1) Both elbows were reduced under sedation within an hour of the injury. The radial head fracture was undisplaced. She was splinted at 90° of flexion for 3 weeks with an above elbow slab. A check radiograph of both the elbows was taken to confirm the reduction of the elbow joints. (Figure 2) After seven days, the swelling subsided and slab was converted to an above elbow cast. At the end of five weeks both the casts were removed and she underwent physiotherapy. By the end of the 8th week the patient had regained functional range of movement and at twelve weeks she was doing her regular house work. (Figure 3, 4, 5) 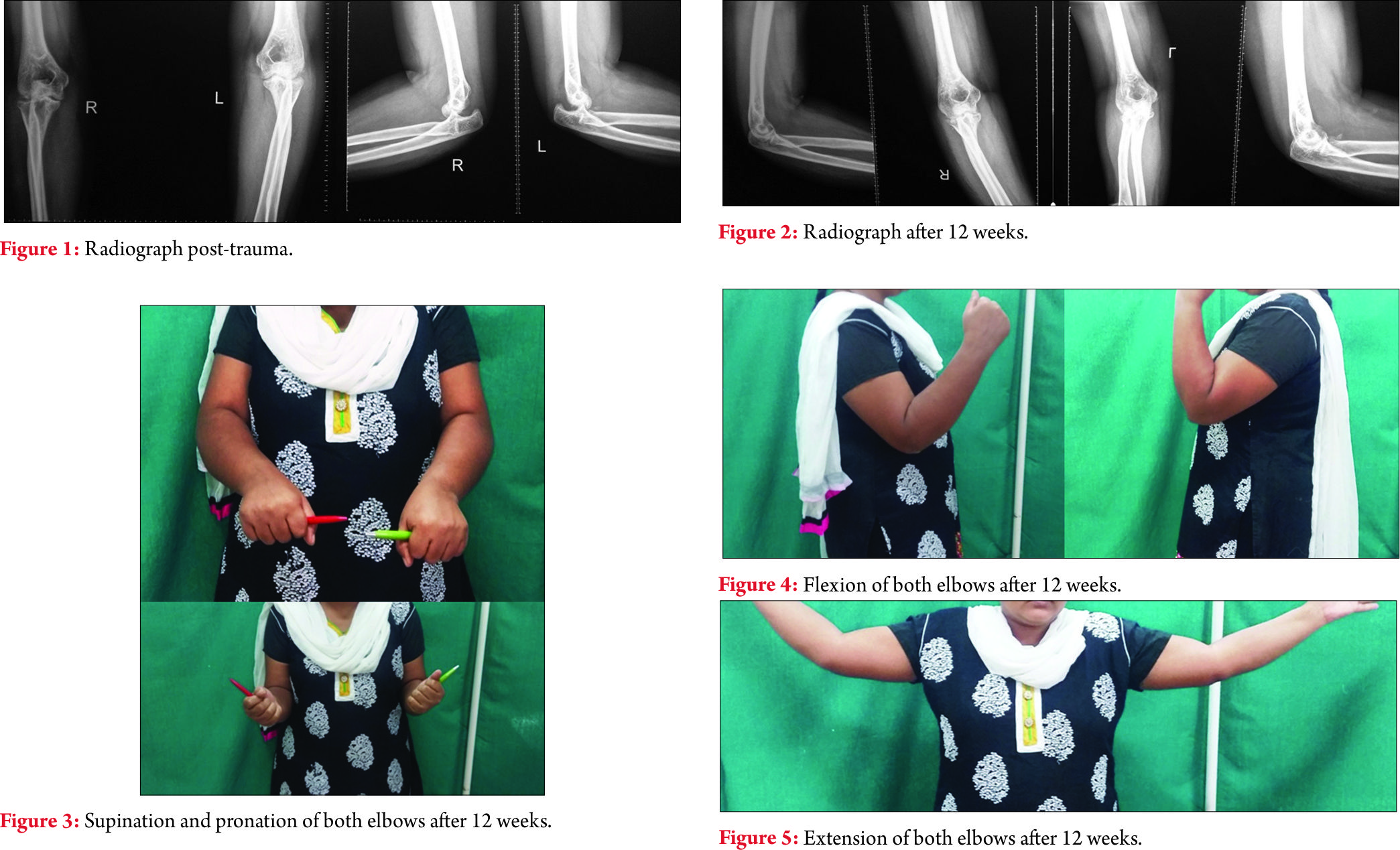 Elbow dislocation is a common event, being the most frequent joint subject to dislocation after the shoulder, the majority being posterior [2,3,4]. It is common for children to suffer an associated fracture and many are the result of sporting injuries [1]. Bilateral elbow dislocations occurring simultaneously however are extremely rare. Reported cases of bilateral elbow dislocation have been limited to young female gymnasts with proven joint hyperlaxity [3,4,5] and an isolated hang-gliding accident in an adult male, [3] and remain rare.The rarity of bilateral elbow dislocation stems from the fact that it may only occur under special circumstances with both the elbows extended and most of the body weight acting through the elbow joints with elbows in extension and hands outstretched [3,4,5].
Elbow dislocations form 11 to 28% of all injuries to the elbow [3,4]. The most common mechanism of injury is fall on outstretched hand. The body weight generates a downward force with vertical and horizontal component which unlocks the ulna out of trochlea [3]. As the elbow joint continues to hyperextend, the anterior capsule and collateral ligaments fail leading to posterior dislocation of the elbow joint [2,6]. Bilateral posterior elbow dislocations occur in special instances where the patient tries to stop his fall with both hands outstretched at the time of impact [3,4,5].
Cadaveric studies have shown that posterior dislocation is most likely with the elbow between 15 and 30° of flexion [7] and that a rotatory torque applied to the ulna, e.g. in a fall with the forearm pronated, plays a role in the mechanism of dislocation [6]. With the elbow in full extension, the majority of stress is directed on the tip of the coronoid process [7].
Josefsson et al, [8] in 1987, reported outcomes achieved through the analysis of surgical treatment of the elbow dislocation against the non-surgical one, concluding that surgical treatment should not be provided in a simple dislocation, which can be reduced by closed means.
It is agreed that prolonged immobilisation results in poor outcome, [2,3,4] and periods of acceptable immobilisation vary from immediate mobilisation to four weeks immobilisation, although this depends on the post-reduction stability of the elbow [2,4].
In the present study, the patient totally recovered the flexion- extension motion of the left elbow, with good valgus and varus stability. In the eighteen-month follow-up period, the X-ray control was shown to be normal, and the patient returned to all her daily activities
Complications like adhesions, fibrosis, myositis and contractures have been observed by Syed et al [3,9]. Protzman [3,10] had studied the degree of remnant flexion contractures of the elbow after immobilisation to vary from 3 to 21 degrees depending on the duration of immobilisation. In our patient we observed a remnant flexion contracture of around 5 degrees. However our patient did not present with any instability of the elbow or recurrence of the posterior dislocation. She had good functional range both the elbows

He purpose of this report was to describe a very rare injury pattern, to present the treatment approach chosen for this case, and to emphasise the importance of early mobilisation following bilateral elbow dislocation.