There comes a time in acetabular fractures-posterior wall and or posterior column fractures when simple Kocher-Langenbeck Approach seems handicapped and you need to have some extension, as in cases of cranial extension of posterior wall fractures and /or need to retrieve loose segments from acetabular joint when with all efforts made by traction, space seems wanting.
Kocher-Langenbeck Approach used for posterior and posterior column injuries and also for some T type fractures, gives very little access to intra articular injuries despite a good traction.
Gluteus medius tenotomy and Trochantric osteotomy was done earlier [still being done by some ] but of late Digastric Flip Osteotomy is gaining popularity as it is less traumatic and helps saving blood supply and ,thus reduce chances of AVN.
The femur head is dislocated anteriorly or posteriorly, without much difficulty and internal status of the joint is observed without having to worry about devascularization of acetabular wall leading to further complications.
So to enumerate the need for Digastric Flip Osteotomy in acetabular fractures are-
1.-intra-articular fragments,
2. Impaction of fragments
3. Posterior wall comminution free fragments,
4. Superior acetabular rim or dome fractures,
5. Assessment of the reduction of the anterior Column, and finally
6. Intra-articular assessment of placement of a long screw inserted into the anterior column.
Keywords: Digastric flip osteotomy posterior wall, posterior column, intra articular fragments, head dislocation.

Pelvi acetabular injuries are almost 6 percent of all trauma. The figure has recently increased in big and small cities due to introduction of high speed vehicles- two and four wheelers, and youngsters more affected [1] because of their experimenting more on these vehicle die to adrenalin rush. Mostly these are high impact injuries [2]
The other sector involved is old and osteoporotic adults, who encounter minor mishaps at home, or fall from height in both the categories. The protocol of treatment changes with age involved and facility /or absence of experienced surgeons in this sub specialty of orthopaedics, availibity of implants and instrumentations and high demand units in the hospital

The technique was described Siebenrock et al.[3]
The initial steps are same as Kocher Langenbeck approach. Skin Incision is followed by, incision of fascia lata in line with skin incision, on deep dissection interval between gluteus maximus and
Medius fibres are seen, this interval is seen in proximal part only. Further dissection is done on
Ilio tibial tract distally. In some cases we may have to detach a small portion of gluteus maximus from lateral part of femur in distal part of dissection. Now the gluteus medius muscle fibre are split with utmost care, next – the trochanteric bursa is dissected and the posterior border of the gluteus medius muscle is exposed at the postero superior border of greater trochanter, along with tendinous insertion of gluteus medius. Fascia of gluteus medius and muscle belly of gluteus maximus are now mobilized preserving blood supply from superior gluteal artery.
Now we need to identify the external rotators of hip and here comes the help from two vascular anastomosis. first is Trochantric anastomosis communicates with ascending branch of medial circumflex artery at the superior border of Quadratus Femoris Muscle ,second vascular marking is branch of superior gluteal artery which is seen on the inferior border of piriforms muscle, this also anastomoses with ascending branch of medial circumflex artery.
By far we are missing an important structure ie Sciatic Nerve, which is now to be identified in its path, posterior to Quadratus Femoris Muscle. 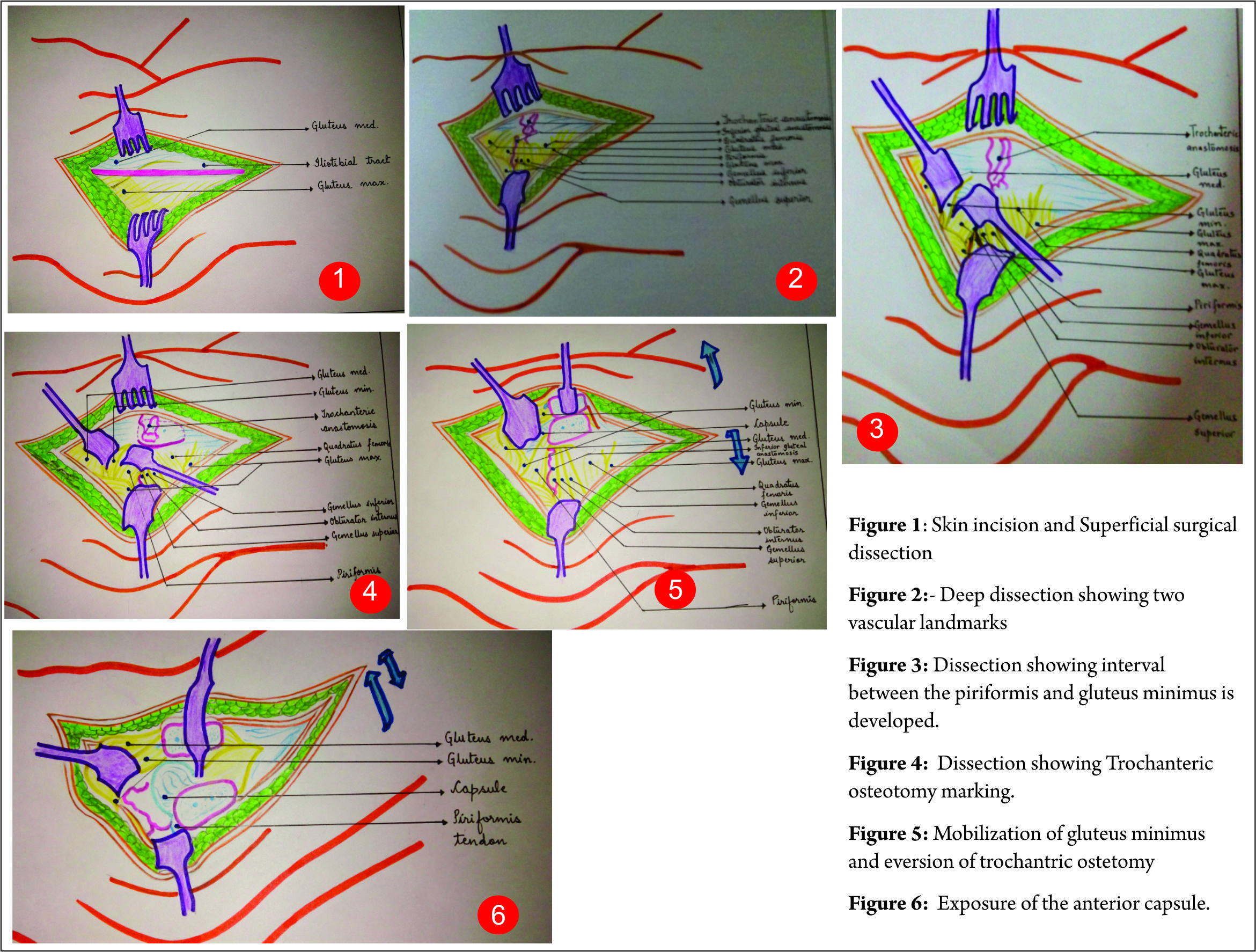 In Arthoplasty cases we usually do not try to see any further but here we need to trace the Sciatic Nerve proximally upto Piriformis Muscle and try to assess its anomalies –if any.[ there are various anomalous positions of Sciatic Nerve which may prove harmful if not identified at this juncture-viz- front of Piriformis, Behind Piriformis ,In between two bellies of Piriformis ,more than one branch of Sciatic Nerve taking different positions in relation to Piriformis Muscle ] and at the risk of being damaged if not traced pre hand. The Nerve is traced where it enters the
Greater Sciatic Notch. In cases where there is single bundle in front of Piriformis Muscle, no
further attempt is made and we come back and no cutting of external rotators, but if there are two bundles of Sciatic Nerve at different positions, we might cut the Piriformis away from GT by at least 1 cm, avoiding damage to nerve in dislocating femoral head.
Next step is, developing Piriformis Muscle, for this Piriformis is retracted inferiorly, while Gluteus Medius is retracted superiorly and Gluteus Minimus is separated along its inferior fascial border. This release is extended upto greater sciatic notch taking care not to damage superior gluteal vessels and nerves. This will clear the area upto mid supra acetabular area.
The Gluteus Minimus can now be seen beneath Gluteus Medius and separation between piriformis and minimus is now carried out, we need to retract piriformis as Minimus carries the circumflex vessels with it and as such needs to be sharply separated from retro acetabular area.
Trochantric anastomosis is now cauterized and osteotomy site is marked by a marker pen or the cautery itself. Now a oscillating saw is used [refr-1] from the tip of greater trochanter to base of
Vastus tubercle.It is better to pre drill the GT so as to ease the fix with screws after job is over.it
is also better to leave a small portion of medius anteriorly with femur ,initially ,till the trochanter is mobilized. This small step provides a prevention from possible injury to retinacular vessels from thick osteotomy. The osteotomy runs lateral to short extensors ,which are left attached to femur and this also helps protect deep branch of medial circumflex artery, which lies deep to obturator externus muscle,[ref-4]
The fascia of vastus lateralis is incised from vastus tubercle, the trochanter is slowly and
cautiously lifted anteriorly and at this stage the remaining fibre attachment of gluteus medius detached from greater trochanter .The piriformis muscle is mostly attached to intact part of GT,
but if its fibres are attached to detached part-they are cut. The hip is now flexed and externally rotated; this causes gluteus minimus mobilization from retro acetabular surface along the capsule to its attachment to femur.
If the gluteus minimus comes in the way of greater trochanter, it can be released from femur to give full displacement to greater trochanter. The trochanteric flip osteotomy, per se ends here but the exposure to operating surface requires visualization of acetabular rim and capsule. The flexion and ext. rotation of hip and mobilization of vastus medialis does the job and entire hemi circumferential rim of capsule is visualized.
A z shaped capsulotomy is performed starting from superior part of capsule and coming down. This aids in intra articular visualization of loose fragments and its restoration.
Here we should see if posterior wall is fractured because if it is fractured, we should modify capsulotomy .carefully incorporating posterior wall. Now this is reflected inferiorly to visualize
the joint. The labrum may be avulsed with posterior wall segment.
The fractured column is now brought close by various instruments and plating is attempted on column. If piriformis or conjoint tendon of obturator internus and gemeli come in the way of plating, they are released two cm posterior from its insertion.
Finally when the plating is over, capsule is stitched loosely, greater trochanter is reattached with
3.5-4 mm screws, Vastus lateralis fascia is stitched and short ext. rotators are reattached. Gluteus
Muscles are reattached over deep drains, ilio tibial tract stitched and then the skin.

This is a very good approach for posterior wall and /or column fractures with superior extension and some T type fractures and saves the morbidity caused by extended approaches. This is now being more often than before. 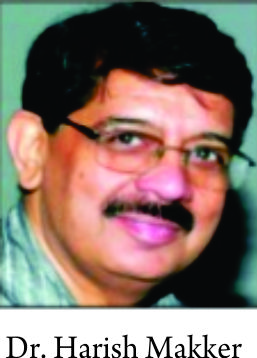